Samantha Grange, a Minor owner and whos father worked at Cowley and knows ' the man in the white coat' kindly agreed for us to use this article she wrote for Minor Matters

As a keen Morris Minor enthusiast myself, the production of the Morris Million has always fascinated me, and a few months ago I treated myself to the book Morris Minor “One in a Million”. It’s the story of a father and son – Bill and Richard McKellar – in Australia, restoring a Minor Million and is a informative book full of detail and photographs (copies of this Morris Minor Million book are available via MMOC merchandise). Later, I loaned the book to my father who still lives near to the original BMC site. Just a few days later I received a telephone call from him with wonderful news. Not only did my father remember the photograph being taken and then appearing in publications during January 1960, he also recognised the young man in the white coat! Even better was the fact that the person in question still lived locally to my father and was happy for me to meet him. After a few phone calls arrangements were made and I travelled from Cornwall to Oxfordshire to have a chat with him.

This gentleman - Gordon - is now 83 years of age and understandably is keen to protect his identity and privacy, so I am not able to go into too much personal detail. However, I felt incredibly privileged that he was prepared to give me his time. I assured him that I would share this information carefully, responsibly and that it will not be duplicated without my permission first.

Gordon started his career as an Airframe Fitter in the Royal Air Force. On leaving the RAF, Gordon had been issued a book unique to him listing his previous roles and skills. During his final nine months RAF service Gordon had been responsible for modifications and checking that work had been completed satisfactorily. On leaving the RAF he applied for a job at BMC and initially he thought he would go on the main production line along with everyone else. However, on his first day he was called into the main inspector’s office to discuss the best role

for him. The main BMC inspector decided that, with his experience, Gordon would be most suited as a Production Inspector on one of the four assembly lines. Gordon started working in this role in 1957 and as quite a young man, this was quite an achievement. When Gordon left the RAF he was earning £7 per week and he proudly told me how he doubled his money when he started at BMC on £14 per week. Gordon worked shifts, sequentially doing two weeks on days and two weeks on nights. It wasn’t just the Morris Million he was responsible for but all models including the vans.

Gordon remembers a lot of press and cameras being present for the photograph and that it was very much staged. It was taken by a local company, possibly the Oxford Mail Newspaper photographer, and issued as an official press picture. Gordon was 25 years old when the photograph was taken and had been working with BMC for three years by then.

With 34 years in total on the same site and 28 years as an inspector, Gordon saw thousands of cars and describes the Morris Million as ‘just another car’. He explained how they were not all assembled at the same time and were selected in what seemed like a bit of a random process. Gordon explained that, at the time of production and assembly, there were other quite bright colours of cars being made so he thought nothing of the lilac Minor Million colour but people were wondering if the lilac colour would be liked by the public. The BMC staff

were not offered an option to purchase any of the Minor Millions but the understanding was that they were going to be very expensive. Gordon was amazed to learn how few now remain and their current market value.

Gordon and his lovely wife Liz, made me feel so welcome and both enjoyed talking about the past. We shared some lovely stories and photographs and Gordon happily posed for some informal snaps to go with this feature. So, the mystery is no more, the man in the white coat inspecting the Minor Million is Gordon and, in his words, “Well I’m still here and so is the Morris Million, that’s not bad really is it? 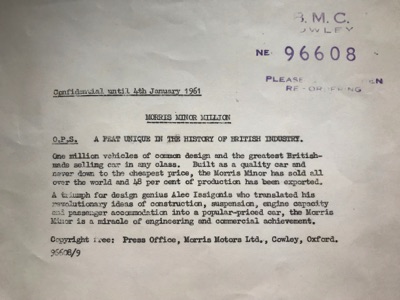