HISTORY ABOUT TED’S CAR ( the Million that wins everything )

Some time ago I got chatting to a retired Police officer at a show and I mentioned that 167's first owner was the wife of a Chief constable in Oxford so he made enquiries on my behalf and thought you folk might enjoy reading this fascinating story from another retired police officer who remembers my Million in Morris Garages in Oxford when new.

As a member of the Oxford City Police Association I was in receipt of your email concerning the special edition Morris Minor Reg No 264 KJO and the search for the original owner which by now you are aware was our Chief Constable at the time,

For the first two years of my service as a probationer I had to live in single mens quarters in our Headquarters in St Aldates Oxford which happened to face the famous Morris Garages Limited.

Prior to this I lived in a road next to the car factory in Cowley Oxford and my father worked at Morris Motors as a tuner/ mechanic for a total of 37 years. As it happens I joined Morris Motors which was then under the BMC banner as a young post room boy at fifteen. After some twelve months I got the opportunity to work in the sales department which in those days was considered a good career move. For about twelve months I did general tasks but then got lucky again and went to work with one of the senior managers called Bill Taylor who was responsible for paying loyalty bonuses to the franchised distributors, main dealers and retail dealers throughout the UK.

The more franchises they held the greater the bonus paid. (Morris, MG, Wolseley, Riley. I actually did the processing and he authorised the payments

When the lilac special edition Morris Minor was announced we were given the job of allocation iSOMEnitially to the main Morris Distributors in the UK. On the first release each Distributor was given one vehicle which they had to display in their workshop for one month.

As the vehicles came through the build programme they were allocated accordingly but some of the main distributors put the pressure on as these vehicles were very sought after and they retailed them despite agreeing to hold onto them for a month. The Morris distributors were responsible for releasing just one car to each of their main dealers. These vehicles were in such demand that they were selling for over the recommended retail price and some customers complained about this but in those days it was a unique situation. We used to get calls pleading for a supply often with an important customer on the end of the sale. Whilst we stuck to the agreed policy our Sales Manager Frank Nobes used to let one or two through the system to his favoured distributors probably influenced by a few more orders on the other Morris models available at the time.

I probably allocated the special edition Morris minor to Morris Garages which was eventually sold to Charles Fox who gave it as a present to his wife.

My father was one of a small team who were responsible for the special tuning of these vehicles before they were released to the distributors but in those days all cars had a running in period after which the engines were emptied of oil and refilled.

Young probationary officers living in single mens quarters often got the perk of a new car from Morris Garages to run in over a weekend especially the early Morris Minis and I fondly remember having a grey Morris Cooper with my colleague PC Bill White driving up to Co Durham where his family lived on a Friday afternoon after an early turn shift, watching Sunderland play at home on the Saturday afternoon, getting rat assed on Newcastle brown ale in the local working mens club, where they never let you buy a drink and then driving home on the Sunday ready for a night shift on the Monday night.Those were the days.

My first car was a Morris 1938 tourer which I bought for £12.50 when I was 16 from the Personnel Director at Morris Motors. My father and I totally rebuilt it as we both worked repairing cars every weekend. I sold it to a University undergraduate for £74.50 some eighteen months later after a lot of heart searching. I am in fact a member of the Morris Register and still yearn to purchase another Morris eight especially after receiving the monthly magazine and seeing the lovely specimens of Morris cars still in existence.

This letter was from someone who contacted Ted in 2018

Ted Brooke tell his own story how he did it

Having had minors since passing my test aged seventeen I always strived for something a little special, I spotted a minor million project in classic car weekly in 1993 in Gloucestershire.

Other projects meant a slow start but most of the hard work on the bare shell and a coat of primer by the end of the century.

2001 saw a house move to a derelict small farm and the minor had to be on the back burner for many years packed away in cardboard boxes for the next few years. Priorities first meant renovating the cottage then building a large workshop with spray booth determined to complete the car in time for the Millions celebrating their fiftieth birthdays in 2011.

Now in my fourth year of concours showing within the owners club, I thought I might try my luck against other marks,

when arriving at Manchester and seeing the quality of the competition I couldn't believe it when I was given the top prize. 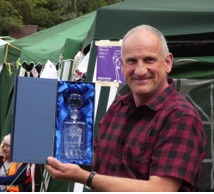 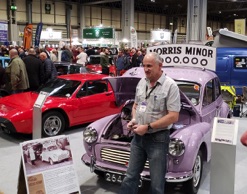