Photo: - with Mr L. Bowles and its designer, Mr Alec Issigonis (right) and the Millionth car 8 days after it was built. The car was used extensively by the BMC Publicity Dept until the 20th April 1961, when it passed into the hands of the National Union of Journalists’. The choice was made for its publicity value, as it was sure to get the car mentioned in every newspaper!

From the journalists union the car apparently passed on to the British Red Cross, who raffled it off . It was registered in Bristol on the 1st June 1961, perhaps the last of the millions to be registered, and given the number 1 MHU (one million in engineering terms). The winner to the raffle was a young girl in Wales who was too young to drive! The car went to her, then to the firm her family owned, and then to another owner in Wales.

The car was restored (after being painted red) in the early 2000s  and has been recently in 2015 been bought at auction by Mike Alford of Lincolnshire and has undergone a more professional make over....well done Mike. 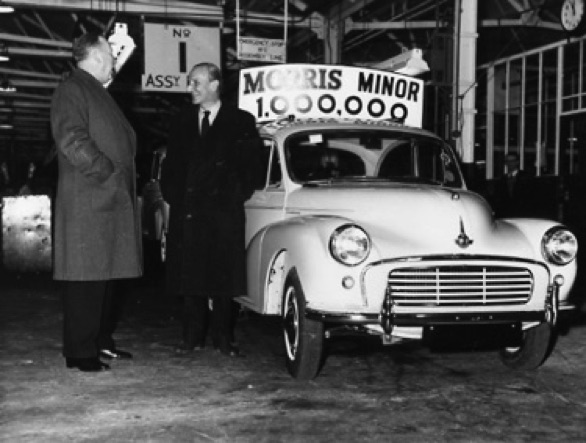